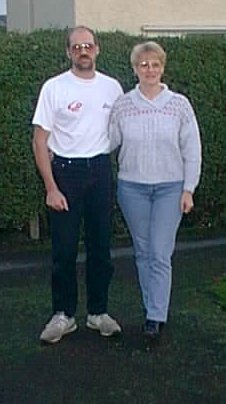 Ian and Sue are two of the original four people who set up JARS. Over the years they have worked for JARS from England, heading up most of the trips to Romania. They worked full time collecting, sorting, packing and transporting the aid, as well as fundraising, giving talks and many other tasks as they came along.

On the many trips they encountered all sorts of troubles, including van breakdowns and stoppages at the border, but this did not deter them from continuing, though from time to time they did feel like it! God was always there and that was what kept them going.

They had been to Romania over fifty times but had lost count of exactly how many trips they had done when God called them to move to Romania and work for Him in the country itself.

They are now doing some work with Hannah, a Romanian-registered foundation. They worked with Hannah over many years from England, and this foundation has received most of the aid that has been brought to Romania over the past ten or so years. Ian and Sue moved to Romania in December 2006, and are continuing to find their way as to what God is calling them to do. They believe God said to move to Romania and He would show them the next step in their ministry. (Ian always said, “If God told us everything He wanted us to do at once, we would probably say no, expecting the calling to be too big for us.”)

Through Hannah, Ian has been helping out with some computer work, and is helping Misu and others involved by scripting a web site about the Huţuli people. Sue has started to give free lessons in speaking English. She felt prompted to take a TEFL course a couple of years ago, and this has proved the right thing to do. She currently teaches a beginners class an intermediary class and an advanced class each week.

They also help with the kids camps Hannah run in the summer, and Ian also helps with the building work at the camp site.

Ian and Sue have recently been more involved "hands on" with Richard Wurmbrand Christian school, in Iaşi. Ian has been installing and looking after the school's computers and Sue has been helping to teach the pupils English.

Ian and Sue's financial support is separate from J.A.R.S. funds. If you would like to support them financially for the work they do through J.A.R.S. either get in touch through our contact page or you can give through their stewardship account. Click the link to find out more. You can also download a support form that you can use off line to post to Stewadrship.